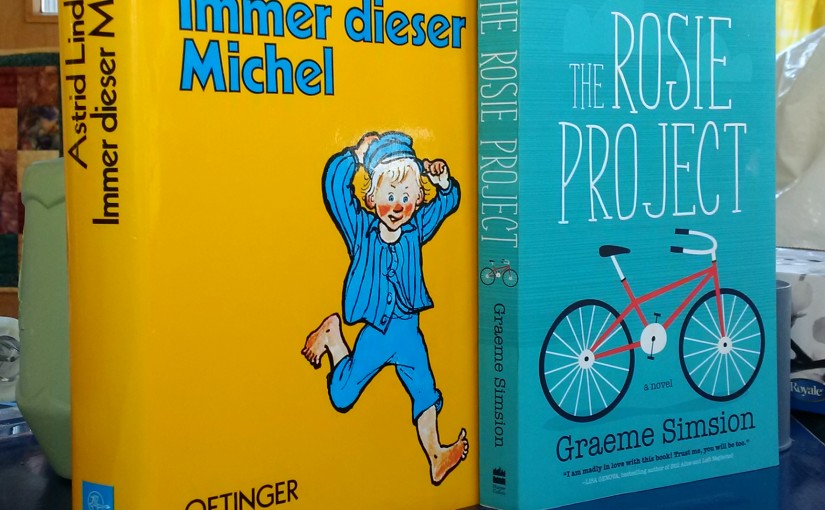 The writing on the spines of continental European and south American books generally faces up (tilt your head left to read), the writing on north American and other English language books down (tilt head right).

That sent me on today’s wiki wander.

One reasons given for the US way are a book lying face-up will have the spine in the right direction to be read (a continental book’s title would be upside down).
Another reason is that, to walk down the usual left-to-right direction of a shelf, one is going forward rather than backwards as one would be reading the continental style.

A reason for the continental way would be that, books of a series (eg multi-band encyclopedias) would be read in order when faced this way.
Another one is that the left-tilt of the head when reading continental-style titles puts the (statistically more likely dominant) right hand in a more ergonomic position to reach for the book. And, of course, walking past a continental shelf, the titles will stream past like the intro on Star Wars, so that must be the right way…

Actually, Star Wars or not, it turns out there has been a standard for this (ISO 6357) since 1985. It says that titles should be written the north American way, facing down. Looks like this is one of the few ways where the standard-loving Germans have not jumped on board and implemented it. Makes me wonder why, but there were no good explanations in the wandering.

Some part of me now wonders if this different direction, and the different head tilting that goes with his, could have any relationship to our reception of the book. Could our head tilting to read the title lead to a different brain hemisphere being active in analyzing and choosing titles? Could it be that the left-tilting Germans are so literal and exacting because of the way they have always needed to lean to choose their books? ;-)